About 270 pilot whales are stranded in Strahan, a small town in Tasmania, an island state off the southern coast of mainland Australia. They’re scattered along two sandbars and the strip of beach, according to the Tasmanian Marine Conservation Program, which is leading the rescue operation.

“Late yesterday, we had about a third of the animals were already deceased,” said wildlife biologist Kris Carlyon at a news conference on Tuesday morning. He added that it was difficult to make a more specific estimate of deaths, since the whales were spread out across a large area and some locations were inaccessible.

“This is a really challenging event,” he said. “In terms of mass strandings in Tasmania, this is up there among the trickiest we’ve ever had to deal with.”

Other potential problems include the unpredictable tide that’s washing in, and the possibility that the distressed whales might attract sharks to the area.

The rescue teams, numbering about 60 people, include volunteers, police, fish farms and the Tasmania Parks and Wildlife Service. With the clock ticking, they’re forced to triage by starting with whales that have the best chance of success, said Carlyon.

First, rescuers are going to try to “refloat” the whales by “(shifting) them in water,” Carlyon said — and if that doesn’t work, or if it causes the whales to behave erratically, they’ll move onto another strategy.

The rescue mission will likely take days, raising concerns that the whales might not live that long. But the current weather is keeping the whales wet and cool, which is “ideal,” Carlyon said — if conditions stay like this, the whales can survive a few more days.

It’s not entirely clear what caused the whales to wash up on shore, though Carlyon added that there have been a few other mass strandings in similar locations. The whales might have been drawn in after feeding close to the coast; or, a few whales may have wandered too close in “simple misadventure,” and the rest of the pod followed. 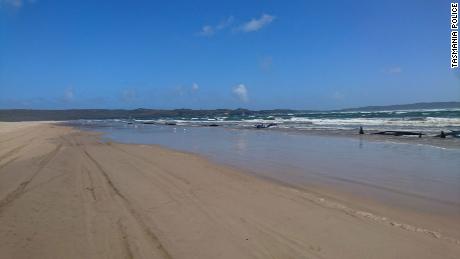 After rescuers hope to save the remaining whales, they’ll have another grim task before them — moving dozens of whale carcasses from inside the harbor out to sea. Typically when strandings occur, experts prefer to leave the bodies, Carlyon said — but they can’t do that in this case because the area is too close to human campgrounds and activity sites.

Officials warned the public to stay out of the area, and not to approach the beach in boats.

Tasmania is the only Australian state where mass strandings of whales and dolphins occur on a regular basis, according to the state’s Department of Primary Industries, Parks, Water and Environment.

These mass strandings often involve social species that live together in large groups, according to the department. Pilot whales, sperm whales and bottlenose dolphins are the species most frequently stranded.

Whales have “very tight family bonds” so if one whale is stranded, others may hear its calls and follow, leading to an entire pod being beached, according to the department.

CNN’s Jack Guy and Sol Han contributed to this report.