Protesters marched in Rochester, N.Y., on Thursday night, as many appeared unswayed by the city’s mayor’s recent decision to suspend seven police officers involved in the suffocation death of Daniel Prude.

Prude, 41, a Black man, died when he was taken off life support March 30. Just seven days earlier, a “spit hood” was put over his head during an encounter with Rochester police to prevent him from spitting — after he ran naked in the street. He was held down by police for roughly two minutes until he stopped breathing.

A medical examiner ruled his death as “complications of asphyxia in the setting of physical restraint.” Delirium and acute intoxication by phencyclidine, or PCP, were listed as contributing factors.

Rochester Mayor Lovely Warren announced the suspensions at a news conference. His death had received no public attention until body camera footage was released by his family on Wednesday. Warren said Prude “was failed by the police department, our mental health care system, our society, and he was failed by me.”

After her announcement, protesters denounced racism as they marched on Rochester police headquarters, where officers stood dressed in riot gear, as the crowd waved Black Lives Matter signs and flags, according to Rochester’s WHAM-TV. 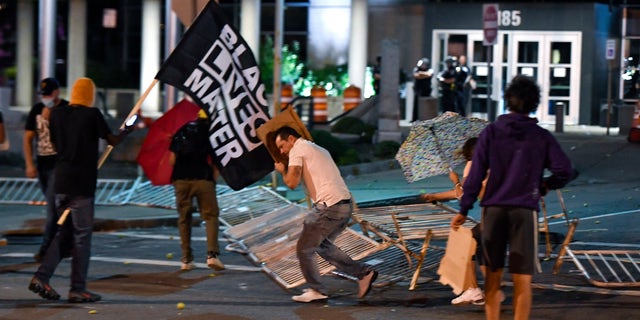 Protesters tear down the barricades in front of the Public Safety Building in Rochester, N.Y., Thursday, Sept. 3, 2020. Seven police officers involved in the suffocation death of Daniel Prude in Rochester were suspended Thursday by the city’s mayor, who said she was misled for months about the circumstances of the fatal encounter. (AP Photo/Adrian Kraus)

Officers doused some protesters with a chemical spray and fired an irritant after demonstrators approached the building and shook surrounding metal fences. Multiple reports indicated pepper balls were fired by police.

Throughout the night, officers would continue to deploy the use of pepper balls at protesters, according to video by WHAM reporter Tanner Jubenville.

Video later showed officers pushing demonstrators away from Rochester police headquarters towards an area underneath the I-490 overpass, located south of the building, reports said.

Some protesters responded by throwing bottles, and it appeared at least one person was detained, according to a video.

Police continued to push the protesters south, and a crowd of roughly 70 people was later seen crossing the Ford Street Bridge around 2 a.m., with a patrol car monitoring behind them, according to video by WHEC reporter Andrew Hyman.

The Associated Press contributed to this report